One-Dyas B.V. has begun production from the gas platform P11-E, located in the North Sea about 50 kilometres outside the Dutch coast. Our new innovative new platform concept enables ONE to economically develop two marginal fields despite current gas prices. Production began in October 2016 and is estimated to end in 2021. During that period 650 million Nm3 gas is expected to be recovered. The satellite operates emissions-free. Power is generated by a unique combination of solar and windmills, storing renewable energy in batteries.

There are relatively few undeveloped gas prospects and fields remaining on the Dutch Continental Shelf, which makes it challenging to create economically attractive new developments. Rising to the task, ONE-Dyas partnered with GeoSea N.V. to develop the ground-breaking Oranje-Nassau Standard Satellite (ONSS) now is in use for the first time for the P11-11 and P11-12 gas fields. Developing these fields has allowed ONE-Dyas to completely manage an offshore E&P asset, from exploration discovery to production, for the first time in its history.

Alexander Berger, Executive Director of ONE-Dyas: “P11-E is the first offshore development completely managed by ONE-Dyas from exploration discovery till production. Despite low gas prices, we have demonstrated that we can successfully develop offshore gas fields within time and budget. ONE-Dyas shows again it is the operator of choice for marginal fields.”

According to EBN, this excellent development demonstrates the way forward for an industry under pressure. It was safely executed and will provide lower carbon energy in a cost-effective manner to meet society’s needs while moving forward through the energy transition.

The ONSS consists of a standard design for the topsides combined with a modular jacket. The topsides, although small, accommodate a free-water knockout facility and have three well-slots, a tie-in for a subsea well, a tie-in from another ONSS, an export riser with the provision for piggy-backline and a J-Tube or an umbilical.

Beside the process facilities, the unmanned satellite is equipped with an emergency shelter for eight persons, a helicopter deck and a five-ton crane. Several wind turbines and solar panels generate power. The design of the topsides can be used without adjustments for a wide range of gas fields up to two million m3/day gas throughput. The modular jacket, by use of modular transition pieces, is suitable for water depths of up to 50 metres and can therefore be placed in the entire southern North Sea. The jacket design is certified for use in the United Kingdom and the Netherlands.

Both the modular jacket and the topside have been constructed by Heerema. Ronald Wiebes of Heerema: “With the topsides and jacket having been built indoors at the Zwijndrecht yard of the Heerema Fabrication Group, we are proud to have contributed to the success of the P11-E development. Other operators should look at this development as an example of a successful, low-cost new concept. Further standardisation can help the industry to reduce costs.”

The platform has been installed by DEME Group. Niels van Berlaer from EverSea NV (DEME Group): “We are very proud that we could participate in several development phases of the successful P11-E project. With the ONSS concept we are convinced ONE-Dyas has the key to cost-effectively developing marginal fields in the future.”

ONE and its partners TAQA Offshore B.V. and EBN B.V discovered the P11-11 field in the spring of 2014. This typical marginal gas field contains an estimated 650 million Nm3 recoverable gas reserves. After P11-E was placed, a second well was drilled from the platform discovering the P11-12 field. This field is expected to contain some 200 million Nm3 recoverable gas reserves. Both wells have a high Gas-Condensate-Ratio and are drilled through a thin oil rim.

The time between discovery and first gas from the P11-11 field lasted only 28 months and has been quoted in a publication of CGG as “the fastest ‘turn around’ in the Dutch offshore during the last 13 years”. ONE believes that the ONSS standard platform design significantly simplifies and shortens the engineering process, making first gas within eighteen months an achievable target.

From well to pipe

Water is separated from the produced gas and condensate at the ONSS. Gas and condensate are then exported via a new pipeline to the TAQA-operated P15-D processing facilities.
The new pipeline has a length of 9km and 8” diameter, with a 2” methanol injection line. The new pipeline is connected at the seabed with the existing pipeline from P15-F to P15-D. The total pipeline length from P11-E to P15-D is 18 km. The pipeline navigates through nine metre-high sand dunes from P11-E to P15-F, crossing telecommunication cables and avoiding old pipelines and future wind turbines. The pipeline was installed by Allseas in 2015. Allseas was given a large installation window to select their best opportunity to install the pipeline.

To ensure maximum safety when people are on board, a fully closed fire- and explosion-resistant wall separates the processing and non-processing area. The platform is equipped with gas and fire detection and the helideck has an independent dedicated high-pressure water & foam fire extinguishing system. The platform is also equipped with an early warning vessel anti-collision system (AIS) monitored from the Q16 Maas control room.

To keep the environmental impact as low as possible, the platform includes the following features: 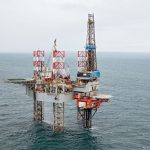 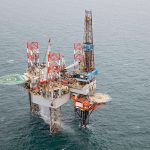 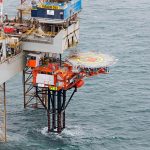 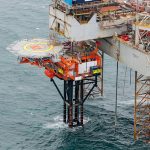 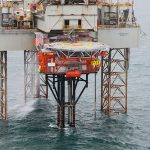 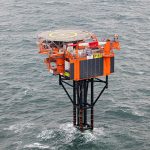 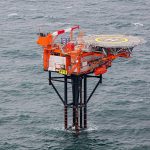 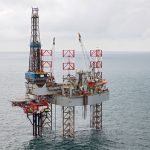