“Q16-Maas” is a gas field just off the coast of the Tweede Maasvlakte near Rotterdam. The gas field is produced from a treatment plant on the Maasvlakte. Q16-Maas belongs to the so-called marginal gas fields. The extracted gas is owned by ONE-Dyas BV and its partner TAQA Offshore BV. Through EBN BV, the Dutch government is participating in the gas production at about 40%

The treatment plant will be able to process around one million cubic meters of natural gas per day. The quantity produced by the gas field will decrease after a number of years as the pressure in the field decreases. The Q16-Maas field contains a lot of condensate and, moreover, butane and propane, which are sold as separate products after treatment of the gas in the refinery. The condensate content is approximately 500 m3 of condensate per 1 million m3 of natural gas, more than ten times as high as for an average Dutch gas field. ONE-Dyas butane and propane being given off as separate product streams from natural gas is unique to Europe.

The Q16-Maas gas field was discovered with the MSG-03 test drill in August 2011. Before the exploratory drilling could take place, the drilling site was laid on the Aziëweg on the Maasvlakte (Rotterdam). The ground was smoothed out and liquid-proofed, concrete was poured for the water troughs and gutters and the terrain was paved. To prevent contamination of the groundwater, a steel pipe, the conductor, was driven to a depth of about fifty meters. A concrete pit cellar was built around the upper part of the conductor.

During the drilling of the MSG-03, a fifty-meter-high derrick was placed above the pit cellar. Pumps, generators, office containers and silos with drilling fluid etc. were installed on the site around the drilling installation.

On June 5, 2011 the chisel went into the ground. From the drilling location the first part was drilled vertically and then obliquely, towards the gas field that is located about three kilometers from the coast below the North Sea.

When the desired point was reached in August 2011, testing of the gas field started. For this purpose, many measurements were made in the borehole to determine the properties of the rock, the gas and the liquids. Samples have been brought up of the reservoir rock, the gas, the heavier hydrocarbons (condensate) and the water at three kilometers’ depth and pressure and temperature measurements have been performed. On 9 September 2011, the gas field was tested by temporarily turning off the gas.

On the basis of these measurements ONE-Dyas decided to take the gas field into production. The Q16-Maas gas field has an expected total yield of around 1 billion m3 of natural gas, 250,000 m3 of natural gas condensate and 150,000 tonnes of LPG.

ONE-Dyas has outsourced the design of the gas treatment plant to specialized parties. The process is unique because LPG is produced from natural gas, taking into account a varying range of gas, condensate and LPGs, due to the declining production.

The gas that comes up through the pit is under high pressure and has a high temperature. A production valve is therefore placed on top of the pit. The gas is sent to the treatment plant via this production valve, where the natural pressure and temperature are reduced by cooling and expansion. This ensures a first separation of gas, water and condensate. In the drying tower, water is extracted from the remaining gas with a moisture-absorbing granule (Mole Sieve). The gas that comes out of the drying tower contains ethane, propane and butane in addition to methane. Butane and propane are separated by cooling to -48 ° C. Only after this process the natural gas is suitable for delivery to the pipeline of Gasunie Transport Services BV (“GTS”). The ethane is collected separately and transported to the pipeline network together with the natural gas.

The gas, condensate, butane and propane are all sold; the water is discharged to a treatment plant.

The production location Q16-Maas can be distinguished in a number of areas. The classification of the site takes into account the safety risks and the effect distance of a possible calamity.

The pressure with which gas emerges from the gas pit is huge. Gas is also highly combustible material. The extraction of natural gas is therefore subject to safety regulations.

Before a production site is built, a study is conducted into any possible risks and effects on safety, health, well-being and the environment. On the basis of the outcome, specific proposals have been made to prevent dangerous situations or to make the risks manageable. The so-called domino effects have also been investigated; the effects of an incident on Q16-Maas caused by an accident at an adjacent company, and vice versa. All effects that have been found remain within the legal norms and are also presented to the neighboring companies.

To prevent the risk of explosions, the storage tanks for propane and butane were half buried  and half covered with sand. The biggest risk of LPG, asphyxiation, is caused by the fact that it is heavier than air and therefore does not rise. The entire loading procedure is aimed at preventing explosions and gas escapes. The truck and the driver are first scanned and then escorted to the loading area. The load arm prevents gases from being released. It is also protected with a break coupling that prevents the truck from starting without disengaging the load arm. The loading process stops automatically when the correct amount is reached. There are lightning arresters for when loading the LPG .

In an emergency, the entire location is evacuated and the plant is made pressure-free. The small amount of gas in the pipes is then flared through the production flare. Research shows that heat from the burning flare can not have any adverse effects on buildings or people in the immediate vicinity.

The following measures have been taken to protect the environment: 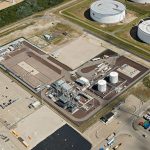 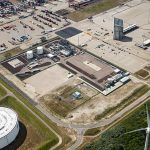 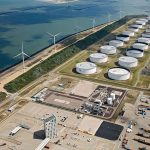 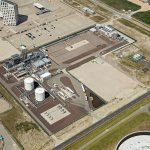 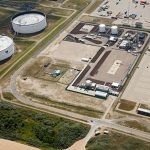 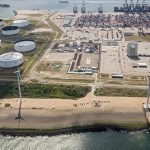 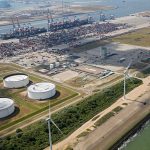 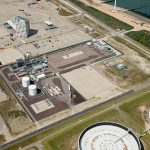